The Earth Warming Faster Than Expected

This, in the parlance of the modeling community, is code games. I play them myself, so I am not immune from criticism.

When someone asks:
“So how did you get such a good answer?”
They won’t appreciate:
“Um… I tweaked every knob, ran it 50 times, and picked the best answer!”
A display of code games looks a lot like their main graph.

What do we have here? Well, check out the last 40 years…most of the lines greatly overestimate current trends, yet these are considered “In the margin” so that their results can Weigh the final answer. Weighing is complicated on a computer, but a human brain looks at a graph and says- that looks like the important area. Making it Weigh heavier on top makes the top numbers look a lot more important than the bottom numbers.

Which ones are closest to the actual trend lines? Why, those are the ones who are showing statistically almost no temperature increase over the next seventy years – even a basic cooling for thirty years. This graph will be great, in thirty years, when they are arguing that the lack of heating is still within the edges of their prediction. (Hopefully, they can then retire, because the 1.0 C degrees of net heating by 2050 are far from assured.

Look, they are basing 100 years of average world temperatures on 40 years of data. This graph, again, starts at the artificial low point, and declares it T = 0. Then his scale runs up to 6! Why?  To show how bad his models are?  Even he doesn’t put his margin of error above 4. Everything interesting has happened between -.5 and +.5, but “in the future” the changes will be much worse than measurement. (Hate to say it, but that isn’t how modeling works. You can only model what you have seen.)

The interesting points are lines that replicate the directions of modern trend lines, which a few do, but those are covered by hundreds of runs that are NOTHING like the current trend lines. They stay “In the box” during measured times, but quickly escalate on a non-physical basis, which only shows the poverty of his data sets.

What does this show? The current set of models can predict everything up to alien invasion and squirrel zombies. (But only after it has happened.) They can look into the past and bend the lines with a handful of carefully chosen variables. A hah! It works, it lives. Sure, it runs off the rails 10 years into the future, but thats what you get with crappy 3-variable models. When we have a thousand year timeline, then match the damn data. Before then, you’re just playing Model Games.

FIRST AUTHOR: Weary graduate student who spent hours doing the work.
SECOND AUTHOR: Resentful graduate student who thinks he or she spent hours doing the work.
THIRD AUTHOR: Undergraduate just happy to be named.
FOURTH AUTHOR: Collaborator no one has ever met whose name is only included for political reasons.
FIFTH AUTHOR: Postdoctoral fellow who once made a chance remark on the subject
SIXTH AUTHOR: For some reason, Vladimir Putin.
LAST AUTHOR: Principal investigator whose grant funded the project but who hasn’t stood at a lab bench in decades, except for that one weird photo shoot for some kind of pamphlet, and even then it was obvious that he or she didn’t know where to find basic things.

Yeah. Science papers are like that. You hope you get added in, you hope the paper is meaningful, but honestly, it just looks good on your resume.

I just spent a week at a radiation effects conference. It was extremely interesting. I did attend sessions which cannot be revealed to the public…partially because the papers presented were awful. The public sessions were much better.

Everyone says “That movie was terrible” but can’t do anything about it.  Bwa ha ha ha haaaa. I’m senior guest editor for this conference. So the paper is good or it isn’t getting past me.

Ok, so I’m part of a team with four other people, but your papers better be good. I’m not passing that crap even on a secret server. I have the clearance to read your paper, so no “the data is under the classified rock, I can’t let you see it” routines.

Yeah, I saw some scary stuff. Id love to tell you about it, but I’d be the one who got arrested. (The line, “I’d tell you but I’d have to kill you” is pretty lame. They do prosecute for receipt of classified information, but giving away classified information is the LONG prison sentence. Neither one gets the firing squad.)

The true sadness of the last week was missing Gulf Wars. Please send pictures! I need to know someone did something they will regret at 7 deadly sins. (Certainly they will after I post the picture on the internet.) I was trapped in the airport for 24 hours. Yet another source of random dead bodies. I kept it purely mental, but frankly, I’m probably going to Hell for … those two at least…. maybe him… yeah, long weekend.

Random Shot of someone doing something they ought to regret. Asking Dyani to pose for a picture never comes out well. Lucky blood comes off of red latex pretty easily.

ps. I just read an article where the scientists had determined that sperm does calculus. (Mine can integrate Maxwell’s Equations in spherical coordinates) This qualifies under my “Sexing up Science” rules. Unfortunately, I can’t think of a good poem involving sex and calculus. THEY ARE NOT FORGIVEN! The poem will occur and their humiliation and downfall is assured. (Later, after I’ve had some more coffee.)

I’ll have you know that geeks are some of the best partiers on the planet. We rocked the Monteray Bay Aquarium and I only sang two verses of my Irish Drinking Song.

Honestly, Beautiful site, I recommend it. The only negative (Which we all laughed at) was the black evil CO2 molecules attacking sea life and driving it down. I’m fairly sure that this was an imaginitive view of science which lacked … everything.

Watching the Dolphin Fish, the sharks, the sea horses, the jellyfish. Beautiful. I’m seriously inspired to write right now. Unfortunately, I’m drunk and I have a secure conference to attend in the morning.

Oh, and I lovee you, man, seriously.

How do I hear bad science jokes? Look… I’m a scientist. K?  Oddly enough these people have a since of humor. Weird and Twisted humor, but hey, we all have our gifts.

Yo mama’s so fat, she expresses her weight in scientific notation.

Yo mama’s so fat, she doesn’t paint her toenails, they are red-shifted.

Yo mama’s so fat that she’s the other man-made object visible from space.

Yo mama’s so fat, tightening her belt causes her to drop below her Schwarzschild Radius.

and finally, for Dr. DNA

Your mama’s so fat that if she moved past a black hole at a high velocity she’d create a closed, timelike, curve.

Folks, I’m not a Sam Adams fan. The Boston Lager is a good lager, but I’m not really a lager fan, so it doesn’t usually win any awards from me. Occasionally, rarely, I’m in a lager mood, Boston is a good one. Ok. They have a new Brewmaster collection, so I tried it out.
Picture of it below:

The Black Lager isn’t as good as last year, neither is the Irish Red. I’d swear that both are less sweet. Though I can’t imagine them changing the recipe. They taste a lot less sweet to me. Right now I’d rate the Irish Red as a Killian Clone. A good beer,but not worth SA prices. Black lager was … blah. Just not as good as even the Magic Hat Winter Beer. Couldn’t believe MH beet SA in a taste test. Weird.

Mighty Oak = Win! A great, dry beer. Haven’t had a good dry finish in ages. Nice. Could probably drink a lot more of them than they put in this damn box. They’ll never sell a six pack of Mighty Oak, damn them. It is a fine beer. I’d say the best find in the box. You decide on your dime.

The IPA is good, smells like a field of flowers and tastes good. A bit much flower for anyone who isn’t a hop head. I’ve been a hop head, in recovery these days, but it is a hop-head beer. Good one. Not my first pick, wouldn’t buy a six-pack, but I don’t feel ripped off drinking one.

Alpine Spring is surprisingly good. It doesn’t win for hops or clean finish, or … anything. A good beer. I picked up a couple in an airport bar. 1) Always drink it from the glass. It tastes much poorer from the bottle. It gets a lot of its flavor from the nose, the bottle isn’t kind to it. Yeah, it is pretty hoppy, but they are light on the acid, so most of the flavor is in the middle nose. If you can’t smell it, you shouldn’t drink it. 2) Drink with some spicy food. It overpowers a mild pizza. It worked great with nachoes. 3) You can get alpine spring in a 6-pack, so get a couple friends and some nachoes, watch some bad movies and feel like you spent your 10 bucks well.

Oh, since you don’t know. I’m drinking my own brew, a Ginger Beer. It is the best thing since sliced bread. In the list of best beers of all time. 1) Hawk’s Ink 2) Scotch Ale (Sam Adams Wee Heavy) 3) Hawk’s Ginger Beer. Yeah, I know, I brewed 2 of my favorite 3 beers of all time… I need to brew a better Scottish Ale and knock the Wee Heavy off the map.

Hawk’s Ink is a Double Black Ale with a little black cherry juice. I have friends who consider that the worst think you could do to a beer. Home brew is about working your own tastes. I just tried a Cherry Chocolate beer. (O’Fallons) IT was so foul that I couldn’t finish it. I have a 5-pack in my fridge for the first one who asks for it. But I bet there is someone out there who would like it.

Yeah, its a wonder to brew your own. If you don’t and don’t know anyone who does, it truly sucks to be you. 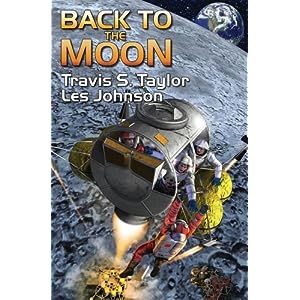 Les Johnson is a good friend of mine. He writes a fine novel. This is science fiction of a solid style. I am never satisfied with the magic crystals most authors try to pass off as science. This is reliable tech from a pair of rocket scientists.To be honest, I worked on some of the items used in this novel…and cried that those projects were canceled. Otherwise, this novel would be true-to-science of around 2020 – the near future.

What kind of book is it? If you’ve ever read a Jack McDevitt novel, you’ll recognize his “What else can go wrong?” style of science fiction. Basically, if it can go wrong, it does. It seems like a crazy mix of problems and problem solving, but it keeps your brain going. I like the characters and motivations, but it really is a book about people climbing the biggest mountain, the Moon, just because it is there.

Do they get home? Do they all die? Read the book.