Lasers on Ships – This is lovely.

Now as I, or any self-respecting engineer, would tell you. This laser isn’t very powerful. I mean, i can take a purple hand-held laser and cook a hole in a paper airplane, light a cigarette, or set gasoline on fire. This laser is … 100,000 times more powerful than that. (but still pretty wussy.)

The biggest sea – danger these days are runabout boats. Basically 1000 Horsepower diesel engines strapped to a plywood gun platform. Their safety was that people have a hard time drawing a bead on a bouncing target moving at 70 knots at an angle to their bouncing platform moving at 30 knots. A rough shot, but a laser has – in computer time – roughly a million years to line up a shot at a gas line. Five seconds later the liabilities of stacking 1/2 a ton of flammable items on your boat becomes apparent.

Drones are a lot tougher than paper airplanes and puppies are cuter than zombies … ya know … Is this is the lowest hurdle you’ve soared over today? Drones catch fire… this indicates that they are not made out of titanium. Modern aircraft are frequently made out of such things as titanium, steel, carbon fiber composites, and rarely aluminum. All of which aren’t catching fire anytime soon with a 100 kwatt laser. (But 20 years ago, 100 kwatt would have been a big improvement over what we could get into the lab.)

The fact is, this is a spiral development. The problems with fielding a laser are being tested … even if the laser doesn’t really fulfill the mission we want it for. The bigger lasers are in development. They may be 20 years away, but someday we will have them, on ships, poking holes in missiles and fighter jets. It really is a game changer…but not soon.

In the next decade, ships that throw shells 100 km at 7 kps will be common. Spare nuclear reactors will be put into future ships, so that they can install rail guns and lasers. Ships will, of necessity, harden themselves to incoming missiles and aircraft; killing their opponents from far over the horizon. Year after year, war advances to the drumbeat of technology. Alfred Nobel knew as much 100 years ago. Luckily, the drum is in our hands. Sleep well and dream of a safer tomorrow. 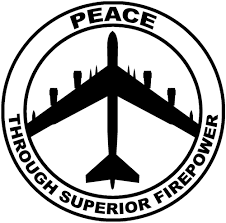 One thought on “Peace Through Superior Firepower”