I grew up in a world where spacecraft touched down on a planet with its legs extended, ready to boost back to the heavens with its crew of intrepid heroes.  Ok, so that world wasn’t actually the real world, but science fiction. Still, it is how I think. Falcon 9 touched down on its little legs in the ocean because they were sure it would screw up and fail. Still, it didn’t. It landed. Ok, landed implicates LAND…not ocean. So, perhaps this is only a 5 on the big boyhood-rocket scale. But, the space shuttle only made a 3. Somewhere, out there, there is a design for a single -stage earth to orbit SSTO, which will work and I will grade it a 7 when I see it. SOMEDAY, Falcon 59 will touch down on the Earth, get refueled, and fly back to orbit. THAT, my friends and neighbors, would be a 10.

Folks, the fact is that we can’t really see a lot of human activity from orbit. Human eyes at least. Google has made it clear that we can see our house from “there,” wherever there might be. But we really don’t see human activity on other planets very often. This is a Very Rare Occurance 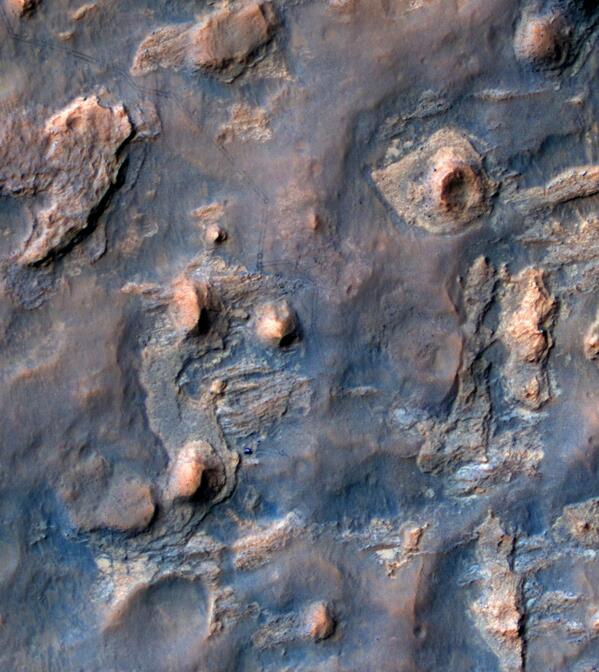 So, what are you looking at? Mars. See the little tire tracks? Those were left by Curiosity. And the little blue dot at the center is the rover itself.  This was taken by the Mars Reconnaissance Orbiter. So, technically speaking, you’re sitting on the Earth, looking at an object on an alien planet. Congradulations, modern world.

As you might have noticed in the past – jet engines are cool. (I think they’ll help me get chicks.) I know, I’m a nerd, I still think D&D is a sure-fire way to attract women. Occasionally I hit things with swords, I’m sure that makes me sexy. Well, this thing should be affixed on a sled for the damnedest way to run your head into a pole as has ever been invented. Yeah, country roads, a hovercraft, jet engines… I’m there. (yeah, the hospital bill will be immense, but maybe the nurses will be hot.)

I know, i should work on building one myself, but I’m working on a mobile dance-pole for the SPANC party for Dragon Con 2014. Its harder than it sounds.

My college years, at NCSU, were spent playing with thermal-chemical and rail-gun plasmas. Yeah, I got to shoot stuff. I had a 3.35 km/s record. For folks who don’t know, thats medium fast. Modern gunpowder will only get you around  1.3 km/s. My dad (I’m from a family of mad scientists) got a gun to shoot a bit faster than that, but he had the airforce budget. I think their gun topped around 5.4 km/s, but I don’t know precisely. That was back in 1990…ish. So, they solved a plasma traveling problem that I didn’t get funded to fix. It pushes them to the 7 km/s barrier.


Nicely, they are already starting one up. Once you decide to give it fins and a rocket engine, your next stop is 9 km/s. (yeah, I have that design sitting on my desktop now.) The way I see it, in the next decade the smart-fast bullet will be the genie out of the bottle. I wish I were part of the teams designing it.

The next naval battle looks like this. Imagine with me:
1) Conflict is announced, the two fleets are set up a few hundred kilometers apart. This seems like a reasonable distance, given the usual speed of things. Fleet of aircraft patrol the space between them, seeking missiles.

2) at roughly 1 shot/second, the railgun carriers launch. it should take approximately 2 minutes to target everything interesting in the opponents fleet.

3) at 45 seconds, the ranging shot hits, over the next two minutes 90% of the opponents fleet takes a crippling hit.

4) total time between announcement of hostilities and subdual of the enemy fleet, 5 minutes. Missiles are still in their launch towers, heading toward the bottom of the sea.

I’m a big fan of Dr. Spencer and UAH. Well, I live around the corner, it takes all my money, and I do a lot of good work with them. One of my old co-workers, Lee, was a student of Roy’s and he had a very strong opinion of AGW back in 1998. I followed his lead and looked at his data… lo and behold, he seemed to be right.

The 2001 – 2003 time frame was the hard one for anti-AGW thought. The trends were against us and the government was against us and … it just seemed like it was wrong. Still, the AGW crowd were busy changing historical data sets, which kept showing high temperature middle ages and roman era events. They say that these only happened in the Northern Hemisphere, while ignoring strong evidence of weather changes in the Southern Hemisphere. It was hard to understand why someone who was “winning” was working so hard to change the evidence.

AGW had to make a slam-bang case right out of the gates, or there was a danger that people would say “oh, well a little warming won’t hurt us.” (because it won’t.) They had to say 1) this warming is different than any seen before. 2) Humans caused this. 3) the US caused this (really, that is their final answer) because 4) The US has to pay the world a trillion dollars to make up for it.

That is the big finale. Hundreds of millions of our dollars are going to the Special Climate Change fund and the Global Environment Facility. Yes, some money is going to poor countries for improvements (money we’re already spending to improve water and infrastructure), but the vast majority of the new money will be tied up in UN and other bureaucracies. Yup, 20 years of arguing, what the nations of the world want is to tax the US, because we have the money, they want it, and they think they can vote the UN to collect it from us.

Everybody knows I like to laugh. I laugh at just about anything. But I love geeky humor.

I’m a hawk/eagle freak. If you didn’t know that … seriously? … ok, so I got pointed to this guys blog.

He’s got a hell of a portfolio and this article stood out. You don’t think much about the middle ages (unless you do re-enactments on a weekly basis, like me) but people have earned their wages hunting with birds since before written records. There are tons of medieval paintings – such as casting of the falcons, below, where similar birds are used.

I used to spend many a summer day, up on the hill at my family’s farm. I’d lay on the hot limestone rocks, staring up at the family of Red-Tailed Hawks who were circling above. The hill had been stripped of trees a decade before and was all grown up in blackberries. Hotter than the forests all around us, the thermals were a magnet for the birds. I imagined that the bunnies which lived in the bracken were also a big draw. I’d sit up there, maybe bring a book, but I’d keep an eye on the sky for hours.

But back to that lovely young woman who may decide to become a professional Eagle Hunter.

Its beautiful that someone can continue this most natural of hunting techniques in the modern day. I’m envious. I’d love to spend a few days out in the mountains, watching the eagles soar, having them return to me. To me it feels like a living poem, grander than I could ever find words to justify writing down. I feel them just knowing that this one girl exists and it makes me happy.

Below you see the future of astronomy… the 32 foot RV. Yeah, not really. But one year we decided to go there.

As I mentioned before, we had a big array of image-intensifying cameras, attached to videorecorders. The goal here was to look at meteors, determine the spectra of the plasma they emitted, then determine what the meteor was made of. (Having a landed meteor to compare results with was imperative.) HEY LOOK, we know what the Stardust spacecraft is made of, we can measure its spectra and use that as a starting point.

SO, we flew to Reno, loaded up an RV, and drove 2.5 hours into the desert. (According to the timeline, it was January 2006, I remember it being October and earlier, but obviously my brain is corrupted by caffiene and meetings.)

Seriously, we drove to the town of Battle Mountain, our “staging area” which is as close to BFE as you want to go, then we drove 15 miles south of town and turned off into the desert. (It is a bunch of sage brush, not a foot tall, in every direction.) after five or ten miles of sage-brush and dirt road, we stopped at a little turn-around, which let us turn the RVasaurous around.

(picture below is just plain stolen.)

We were expecting a re-entry around 2 am, time may be mistaken, it has been at least most of a decade. We got out the cameras and set them all up a couple hours ahead of time. 1 am sharp, the sky went from clear from horizon to horizon, to utterly blocked. By 1:30, there were snowflakes the size of silver dollars falling everywhere.  Visibility was exactly 1 star, which seemed a plausable enough direction to point the camera.

As an added bonus, we turned off the RV so that the infrared camera could take clearer pictures. The battery (which we had tested pre-mission) suffered a sudden and traumatic end-of-life event. The wide-spectrum cameras all went dark. I overrode objections and re-started the RV. Running on RV power, they labored to get the wide-array back on line. I used the pointing camera to stare at a very lonely star, and soon enough we had word that the mission had ended.

The mission wasn’t actually a complete failure, there were some guys flying around in a big ole jet plane with an identical array. They got some good photos…but never shared the data.

We spent a few hours packing all the gear back up and storing it for flight back to Huntsville. We were all exhausted and mad, but it all got packed. Then, the sun coming up, we looked for the road.

Ok, I went outside and kicked stuff. The fluffy snow was sagebrush, the flat snow was dirt and occasionally road. I aimed the hundred-thousand dollar contractor-supplied equipment (The RV) between the piles of fluffy snow, ran the windshield wipers against more fluffy snow, and pounded Red Bull to keep my eyes open.

Took most of an hour to get 5 miles, another 30 minutes to get back to the hotel. I just went to my room and died.
p.s. There are NO bathrooms on that road between Reno and BM. dang.