Sorry that this week has gotten me off to a late start. Huntsville Alabama, home of the warm winter and the hot summer…has had a very cold winter. Since Christmas Eve, when we watched “The year without a Santa Claus” it was clear that the deal between Cold Miser and Heat Miser had gone through. We now had to believe in Santa Claus.  Yes, Southtown got its Christmas Snow storm for the first time… I think ever. There have been some “trace” snowfalls on Christmas Eve or Christmas Day on about 6 occasions since 1929. The day after that one it was 51 degrees, and all the snow melted. This year we got 6 inches and it stayed all week. Total now is around 11 inches for the month. Amazing.

SO, some links on snow.

I found them fascinating. Here was a fun experiment to play with. Ice Spikes in your freezer .
Get some ice cube trays, big ole square blocks, and fill them with DE-IONIZED water. yeah, it apparently matters how much mineral salt is in the water.  Then freeze it nice and slow, and you get … 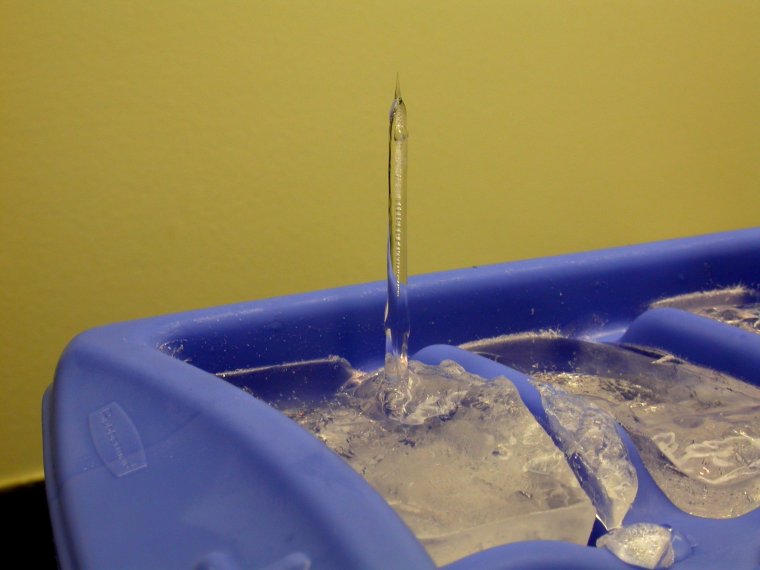 xkcd.com – if you aren’t reading it…then you probably don’t get this joke anyway. From Astronomy Picture of the Day – Explanation: Many think it is just a myth. Others think it is true but its cause isn’t known. Adventurers pride themselves on having seen it. It’s a green flash from the Sun. The truth is the green flash does exist and its cause is well understood. Just as the setting Sun disappears completely from view, a last glimmer appears startlingly green. The effect is typically visible only from locations with a low, distant horizon, and lasts just a few seconds. A green flash is also visible for a rising Sun, but takes better timing to spot. A dramatic green flash, as well as an even more rare blue flash, was caught in the above photograph recently observed during a sunset visible from Teide Observatory at Tenerife, Canary Islands, Spain. The Sun itself does not turn partly green or blue — the effect is caused by layers of the Earth’s atmosphere acting like a prism.

I include this partly because I went to Tenerife, the Teide Observatory, just to watch the Leonids Meteor shower back in November 2002. Beautiful place.  As I like to say, there is nothing like being 10 miles from a tropical jungle and nude beaches to remind you that you are sitting on a barren hunk of rock in the middle of a snow field. Beautiful sky, just beautiful sky. Ok, just some junk I saw today and thought was funny.

Duh! The Most Obvious Scientific Findings of 2010

Smoking a lot of weed is bad for you.
– wow, that is just deep…

Friendless kids are sad.
– but don’t deal with bff drama?

Guys prefer casual sex to dating.
– um, wow again, really deep result. How can I get into this study again?

Sitting in front of the TV all day can make a teen fat.
– Why wasn’t my skinny kid included in these results?

Caffeine affects kids’ sleep.
– yeah, after a cup of coffee it is hard to sleep at my desk!

Kids who study abroad drink more alcohol.
– There is probably a formula x = distance from parents and y is alcohol consuption. y = f(1/x)

Kids raised by gay couples do just fine in school.
Weird that they stick the controversial findings at the end of a set of absolutely non-controversial findings. I hate to equate worthless studies – caffeine affects kids sleep? – with a valuable study about sexuality and children. While this statement is fine, the article attached is a bit misleading. Specifically Lesbian couples raise kids to do well in school.  Though people want to use this study to prove just about anything involving gays. (Which says something about how few good studies out there show positive results for gays.)

I just want to thank everyone for making this a great year. I hope I can put some Christmas pictures on here in the upcoming days. My wife has the camera, but we had a great time. As for the year as a whole, there have been high notes and low notes, but the director has said, “cut” and that year is in the can. Lets see what we can do with the new year.

If anyone has some suggestions, I would love to hear them.  I am working on a couple of novels and a couple of games, as well as some science related topics. I have a lot of (real) work on radiation effects waiting for me at the office, but nothing interesting for discussion online.

Oddly enough, my boss has actually re-opened the “Nuclear Rockets” can of worms.  I know several of your are Nuclear Rocket fans, so I will try to figure out what tools I can use to develop the concepts further. I am a big fan of nuclear electricity powering plasma engines, but the boss wants to go direct to Nuclear Thermal. For those of you who don’t know the difference (probably about everyone) I’ll have a full discussion later. I am a nuclear engineer, as well as a plasma physicist, so I hope I can explain it without making a hash out of everything.  (But not today, Mondays are not good for coherence.)

Have a Happy New Year! I hope you had a Merry Christmas, and I hope we all can look for many returns. Comment in regularly, I could use the feedback.

Someone pointed me to some lovely pictures of a snowflakes , much enlarged.  I’m having a bit of dificulty with the scale, as it has both 2.0 kV and x30 and 1 mm on the screen.  2.0 kV electron microscopes are good for measureing 1 Micron sized objects, so… I expect that 1mm doesn’t mean 1 milimeter, but 1 micron.  Still, odd to have a x30 on the screen.

This is a picture of a X30 view of a snowflake . In any case, these look very different.

An image from an electron microscope could be 2 million times larger, but these appear to be on the order of a hundred times larger.

Here is a good page  where you can see a few pictures at x450 magnificaiton with an electron microscope, and then compare that to the similar light magnification.

Have fun clicking about. Snowflakes can have that nice “standard shape” but they have many variations on the theme, needles, columns, grid hex.  Odd.  Worth looking at for a snow in day.